Chris Russell has been involved with CrossFit for a long time. Russell, who retired from the Navy in 2016, was deployed to Afghanistan in the summer of 2005. He was attached to a unit that was doing these crazy workouts racing each other.

One of the guys in that unit was Dave Castro, and Russell said to him “Hey man, what are you guys doing? That looks crazy.” Castro replied, “Well you should join us next time and judge for yourself?” The workout was 20 minutes of as many rounds of 5 pull-ups, 10 pushups, and 15 air squats (the workout now known as Cindy).

Russell, a Navy trained rescue swimmer, didn’t make it halfway through the workout before he reached muscle failure and faked an injury so he could stop. As Russell puts it, “I was the most sore I've ever been in my life, probably for the rest of the week. I couldn't move. I couldn't wipe my own ass.”

But as Russell thought about how gassed he was doing a workout using just bodyweight movements at high intensity, he knew there was something to using his entire body as one unit and going fast. During his following deployment to Iraq in 2006, he got consistent with it and started seeing results.

Following his overseas deployments, Russell came to Jacksonville to be an instructor at Navy rescue swimmer school. In 2007, he was certified as a CrossFit Level I instructor, and after growing a grassroots CrossFit movement at the Jacksonville Beaches, founded CrossFit Jax. In 2012, Russell was invited to be a judge at the CrossFit Games, and continued to judge most Games since, including this year. I sat down with him to hear his story. 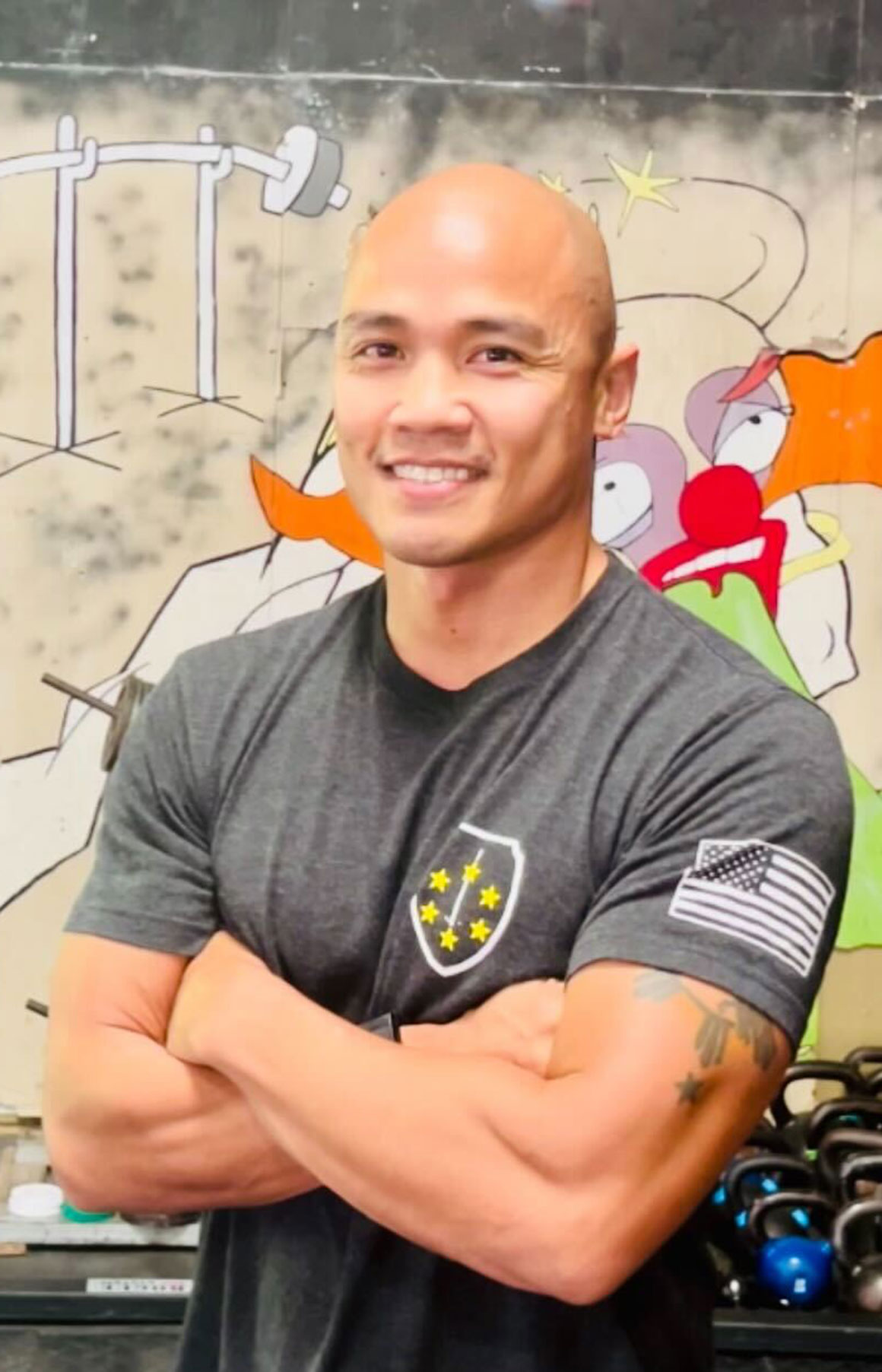 What drew you to wanting to judge?

Russell: Being on level one and level two seminar staff, we get invited to judge for the individuals at the games. And so it's an honor, it's a privilege to be able to do so. And we look at it as, number one, it's our job. We take it seriously. Athletes and spectators want consistent standards and for a judge to call it like it is.

What is it like to be on the floor during the CrossFit Games?

Russell: It's surreal. I can only imagine that it would be like being a ref on the field at the Super Bowl. You're looking around, the stands are packed. It's an amazing experience. It's also scary as hell because there's a lot of pressure there.

What kind of pressure?

Russell: These athletes are the best at what they do. You want it to be a fair competition and you’re literally holding them to the standard. They're either meeting the movement standard or they're not. There is no gray area. Say an athlete performs a squat that’s close, but the hip crease isn’t below the top of the knee, which is the standard. It's a no-rep because it's got to be black or white. So that let the athlete know, holy crap, I got to get lower. Now when calls are made like that on the field, in a packed stadium, you're going to get the reaction that we see at any sporting event when a referee makes a call that we as spectators think is a bad call. We're going to get booed. The commentators are going to discuss your call. But that’s when you know we have a legit sport.

Can you give us a specific example?

Russell: I took a rep away from a well-known Games athlete during one event. He did not lock out all the way at the top of his muscle-up. Depending on who you asked, some claimed he locked it out. No, he didn't. And I gave him a no rep and that was the first time I experienced collectively thousands of people just boo my call because that meant he had to go and do another lap and then finish that one more rep, whereas if that rep would've counted for Josh, I think he would've won the event. It was a close call, but that’s not really on me. It’s up to the athlete.

Who's the most intense competitor you've seen of the CrossFit games?

Russell: Rich Froning, hands down for me. You can get a feel for that, watching him compete on TV. But it's a whole other thing to be there and witness it in real time. And he doesn't quite turn it on until the event has already started. I mean, he just shifts into another gear and you can almost sense it and feel it.

What separates the athletes competing at the CrossFit Games from just the next level down?

Frequently people credit elite athletes, musicians, anybody like that with natural ability. And I think a lot of times that people aren't seeing the years of hard work and practice. Yes they may have natural ability, but I think it's discounting the grind and effort. What's something that you see elite athletes grinding away at that every athlete could or should be doing if they want to improve?

Russell: The basics and fundamentals that we teach brand new individuals and beginners that come in through the door. Our definition of virtuosity is doing the common uncommonly well. And so when you take the basic air squat, as simple as it may look, but you fine tune it and you work on it so much that you become a virtuoso at it that transcends into the other squats that we do in CrossFit. It's the novice’s curse to see shiny objects, and you want to gravitate towards that. You're not going to get a lot of likes on social media when you contrast your air squat before and after photo after you've been working on it for 30 minutes. They want to see the bands and the chains and the plates and the intensity and the veins. But it's the basics and fundamentals.

What is the hardest movement to judge in your mind?

Russell: I don't think it's about which movements are the hardest to judge. I think what's hard to judge are movements that are brand new at the games level. Case and point last year with the freestanding handstand pushup. The athletes had to handstand walk to the next line, come down with control, and do it again. On paper, it sounds very simple to judge that standard. Simple doesn't always mean easy. Well, what made it challenging was under the lights, camera and the action, under the intensity, under the environment.

For that example, how does each judge on each lane get on the same page about how to judge the standard?

Russell: We rehearse days before the event with the demo team, which is former games athletes. And so we get to ask all the questions there. And “what if” everything to death, because we want everything answered so that there's no surprises out on the floor or on the field.

Russell: For me, there was just something special about the tennis stadium at the Stub Hub Center in Carson. That environment, it was just very electrifying. The energy, the noise, as the final heat of the top men or the top women battling for first, second and third place. It was an amazing experience.

In the past decade, the level of competition has changed. What plays a part in that beyond physical training, as far as nutrition, sleep, all that other type of stuff. Is there a lot more focus on that now?

Russell: If you're still doing today, what you were doing in 2018, you're not going to be anywhere close to where the elite are. You absolutely need to be doing volume in all the training and the practice because this is a physical sport. But the paradigm has shifted to recognizing you’re only going to get so good inside the gym because of natural ability and training. And so I have to now consider my sleep, my nutrition, my stress levels, my mental state. So it's more of a holistic approach.

What don’t people see when watching the games?

Russell: There are hundreds of volunteer judges that show up at the Games. They judge the age groups, they judge the teams at the games and it's a hard job. It's the same job that we do. And, just the fact that they're willing to take a week out of their lives every year to travel, out of their own pocket, to spend time away from family, away from their jobs and to just pursue this passion that they have, to help out at the Games, to make it run and go as smooth as possible so that the spectator can enjoy a fair competition.

Chris's favorite gear at the Games

Chris's favorite gear at the Games

Inside the Atlantic Coast Classic

AGAIN FASTER ANNOUNCED AS THE EQUIPMENT SPONSOR FOR THE 2022 ATLANTIC COAST CLASSIC!

Got Kids? A Garage Gym Could Be Your Best Bet

Colleen's Road to the 2021 CrossFit Games

2021 Bacon Beatdown was a Success!

THE WORKOUT WAS INTENSE. THE TUG-OF WAR WAS EPIC.

Again Faster will be the Equipment Sponsor for the 2021 Bacon Beatdown!

Getting to Know Christian Harris

5 Ways to Stay Fit While Living on The Road

How to Build a CrossFit Home Gym In Your Garage